Rich Homie Quan’s “Back To The Basics” Mixtape Is Out Now! 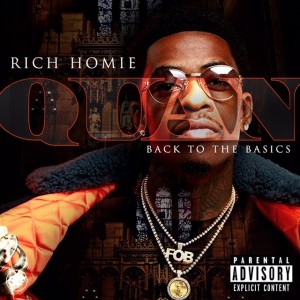 The young Atlanta-based rapper who sold millions of singles as an independent artist – returns with the new mixtape, Back To The Basics. Released today by Motown Records, the collection also includes the “Back To The Basics” movie, which premiered on Noisey and can be seen HERE. Quan’s engaging narration links together the official videos for “Da Streetz,” “Heart Cold” and four other tracks from Back To The Basics.

He chose the mixtape’s title as a nod to the material that helped him become one of the game’s most popular artists. “I just want to get back to my old self, dropping the music I know I’m capable of dropping for my fans,” Rich Homie Quan explains. “I want to get back to where everyone can feel where I’m coming from.”

“Replay,” the high energy first single from Back To The Basics, features him shouting out Mannie Fresh and dropping clever, well thought-out lyrics about the importance of money and being a step ahead of his competition. View the official “Replay” video HERE.

“I grew up with nothing, so every dollar had value,” he explains. “I don’t want to be broke. Never again. That’s why I try to put those things in my songs because when I hear them and I’m saying, ‘Boy, you can’t go broke,’ I’ve got to live up to that. In my songs, I try to make goals for myself and live up to them.”

“Replay” can be heard in a series of short video spots that Quan shot for athletic retailer The Finish Line, Inc.and adidas in conjunction with an exclusive Tubular Shadow colorway release.

The piano-accented “Heart Cold” finds Quan imploring people to take action rather than just talk about what they’re going to do. On “Da Streetz,” as XXL notes, he “gets right to the bottom of how he became such a street-oriented guy. Quan uses repetition and straightforward, but meaningful lyrics to make his point.”Hot New Hip Hop praised him for “showing off his musical versatility with some clever rhyme schemes and melodies” and said, “if this string of new music is any indication, 2017 is poised to be a big year for him.”

Quan made his debut in 2012 with the release of his I Go In On Every Song project. He exploded the following year with the release of the mixtape Still Going In Reloaded, his Gold-certified “Type Of Way” single and an appearance on YG’s triple Platinum “My Hitta” track. His 2015 single, “Flex (Ooh, Ooh, Ooh),” has been certified double Platinum and the accompanying video has more than 100 million YouTube views. Quan is currently at work on his full-length debut album, which Motown Records will release this summer.

You can purchase Rich Homie Quan’s new project, Back To The Basics, right HERE.